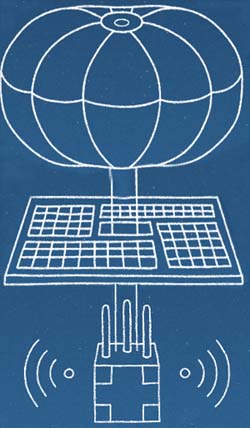 This article was originally published on June 19, 2013.

According to Google, two-thirds of the global population does not have access to the internet. New Project Loon by Google aims at providing internet accessibility to remote and disaster struck areas to get the people online.
Wind power – Moving with the wind
Project Loon uses specially designed balloons that float 20 km above the surface of Earth in the stratosphere to provide internet.
Usually winds in the stratosphere has a speed of 5 to 20 mph and they vary in magnitude and direction.
By making use of these winds, Project Loon balloons can be made to travel in the desired direction by increasing or decreasing its altitude to align with the winds. These balloons are designed to withstand conditions of stratosphere.
The signal is transmitted from one balloon to another and then to the Earth. These balloons will form a global communication network to which people can connect using a specially designed internet antenna attached to their building.
Solar power – Charging with the Sun
The inflatable part of the balloon are made using sheets of polyethylene plastic with a dimension of 15 m wide and 12 m tall when inflated. They are manufactured to last long in the stratosphere.
A parachute fitted to the top of the balloon helps in controlling the descent and landing. All the electronics on-board are powered by solar panels that can  produce 100 watts in full sun.
A box containing circuit boards to control the system, radio antennas to connect with other balloons and ground Internet antennas and batteries for storing solar power to operate at night.
Watch the below video that explains how the Project Loon works.

Connectivity
Each balloon can be able to provide internet connectivity at 3G speeds to an area of about 40 km in diameter. At present, it uses ISM 2.4 and 5.8 Ghz bands which are available for everyone to use.
Project Loon is currently in testing phase. Thirty Project Loon balloons were launched from South Island, New Zealand. These balloons are controlled by Loon mission control and will provide internet to a team of pilot testers to understand its internet experience.