This article was originally published on November 24, 2012.

Introduction
A Global Positioning system consists of three segments – satellite constellation, ground control network and user equipment. A satellite constellation means a number satellites in low earth orbit that provides the signals and navigation data to user equipment.
The ground control network tracks and maintains the satellite constellation by monitoring satellite health and signal and orbital configuration. User equipment receives the signal from satellites and computes user position, velocity and time (PVT).
A basic satellite constellation consists of 24 satellites positioned in 6 earth centered orbital planes with with four operational satellites and a space satellite in each orbital plane. Satellite constellation can support up to 30 satellites in orbit.
Master Control Station (MCS) is located at Schriever Air Force Base near Colorado Springs, Colorado.
The Master Control Station commands and controls all the functions for the satellite network.
The orbital satellites are continuously tracked from 6 United Stares Air force stations around the globe.
Since its development in 1960, Global Positioning System become an important tool for everything from defense to everyday life. First GPS satellites were launched in 1978 by U.S Department of Defense.
Lockheed Martin built most of the GPS satellites for the Air Force. Lockheed Martin designed 21 GPS IIR satellites and modernized GPS IIR-M. As the technology evolves day by day, GPS users demand for better services.
Current GPS devices often search for signals and are hard to access the signal from mountainous and forest areas. GPS jamming is one of the problems military is facing today.
GPS III – The Next Generation
The next generation GPS satellites are being built by Lockheed Martin. GPS III signals will be 3 times more accurate and powerful than the current generation. For military, signals will be 8 times more powerful and thus resistant to signal jamming.
Improved safety, signal integrity and accuracy. 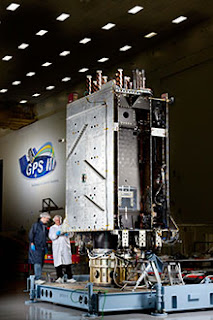 Users will get better accuracy from any region in the world. Lockheed Martin claim that the GPS III satellites will have a 15 year design life which is twice life of the current satellites. The new GPS III satellites can be launched two at once making them economical.
GPS III satellites cannot be easily jammed by accidental transmissions or by enemies. Military gets an assured full access to the GPS.
“GPS has become essential to almost all aspects of modern life” said Lockheed Martin’s GPS III program manager Keoki Jackson.
“GPS III will ensure the availability of this critical utility with enhanced performance to billions of users worldwide for decades to come.”
Watch the video by Lockheed Martin on GPS  Navigation.