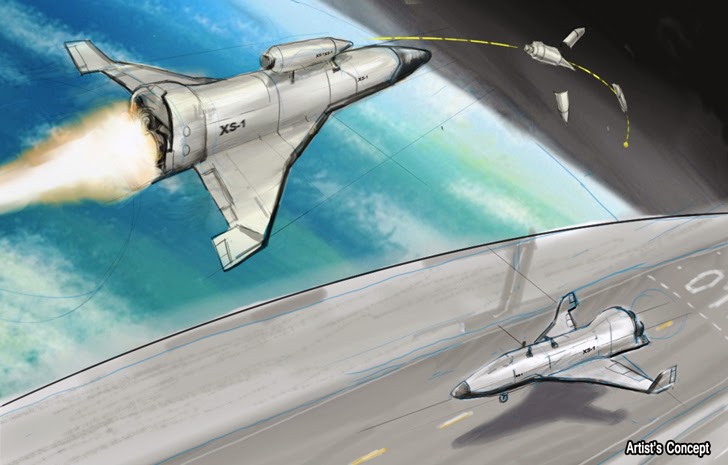 This article was originally published on October 19, 2013.

With current satellite launch vehicles, it is expensive to operate them in each mission. They cost millions of dollars per flight and requires advanced planning and allocation of resources for each mission.

Experimental Spaceplane (XS-1) program
To counter those spaceflight challenges, DARPA has created this program which aims to develop a reusable unmanned space vehicle that can be operated like an aircraft to space. To make the operation clean and simple, there will only be a small ground crew to control the spacecraft.

They will be able to do daily operations and flights from various locations in our planet. With this simplicity and low costs, small satellites can be deployed easily in space.

To achieve this, the aircraft would require better thermal protection systems, recovery systems and autonomous launch and flight systems.

As you could see from the above artist’s conception, the reusable first stage will fly to hypersonic speeds at suborbital altitude. Then the expendable stage separates and deploy a satellite into Low Earth Orbit. Then the hypersonic vehicle will safely return to earth for the next flight.

The aircraft would be able to do daily flights and reach speeds above Mach 10 and deliver payloads into the orbit. The vehicle will enable delivery of payloads from 3,000 to 5,000 pounds. This will help reduce the cost of delivering small satellites into space.

DARPA is seeking ideas and proposals for developing and implementing the XS-1 program. DARPA Special Notice about specific capabilities od the program is now available at http://go.usa.gov/DNkF.