This article was originally published on April 7, 2012.

A Japanese shoe designer is developing “Healing Fukushima (Nanohana Heels)”, a mechanical shoes that automatically plant seeds in the ground as the wearer walks in them. The shoes are part of a project to help rebuild Fukushima.
Designer Masaya Kushino’s imaginative shoes usually sport wild, Dada-esque heels. He’s adorned them with horns, fake ponytails, peacock feathers and ornate gold framing. So it wasn’t a big stretch to add a component for distributing seeds.
“Healing Fukushima (Nanohana Heels)” were conceptualized in partnership with Japanese artist-designer Sputniko, who came up with the project idea. Fukushima remains contaminated with nuclear waste following the earthquake and tsunami that struck the power plant there early last year. Sputniko visited temporary housing there a number of times and learned about efforts to plant rapeseed in the region.
Experiments by Belarusian scientists have shown that some varieties of rapeseed, known in Japan as “nanohana”, absorb radioactive substances such as Caesium-137 and Strontium-90 from soil.

These radionucleotides are stored in the blossoms’ stalks and seed coats, but not in the seeds themselves- which is fortunate because the seeds can be turned into Canola oil, the most popular source for bio-diesel. 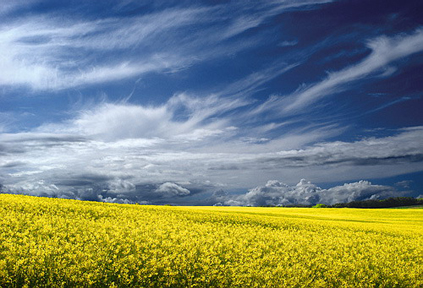 This discovery led, in the 2000s, to the planting of rapeseeds by the Ukraine and Belarus governments in over 50,000 hectares of Chernobyl-affected land, in a move to revive the area’s agriculture industry which had been wiped out by the 1986 nuclear accident.
In the mechanical heels, pressure from the movement causes a tube within the heel to emerge. The compartment containing rapeseeds turns and, similar to a BB gun, a single seed emerges from the end of the tube. Lifting the foot starts the process again.
Despite their apparent functionality, the towering work of art is intended to be a catalyst for discussion about rebuilding Fukushima rather than a practical farming tool.