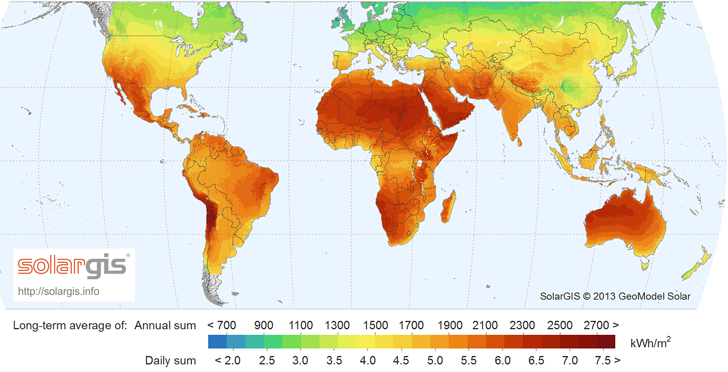 This article was originally published on December 30, 2015.

Africa is often called the “Sun continent” because it receives more sunshine hours than any other continent on Earth. Africa receives plenty of sunshine and deserts like Sahara, Namib, and Kalahari. Deserts make up two-fifths of the continent.

Most of Africa lies in the intertropical zone where the intensity of sun rays are relatively high. These geographical and climatic factors create a huge solar potential to power any place in Africa. Cost of solar power equipment continues to decline in recent years. This will help African nations to increase their solar installations to support their economies.

Source: Parliamentary Assembly of the Mediterranean

Morocco is the only African country with power cable links to Europe and hopes to benefit from exporting clean energy to European nations. With other African countries starting to follow a clean energy path, Africa is poised to become the next solar powerhouse of the world.

More than 85% of Africa’s landscape receives 2,000 kWh/(m² year). A recent study on the solar power potential of Africa indicates that a solar facility covering 0.3 % of North Africa can generate energy to power the whole of the European Union.