How does a Doppler weather radar work? 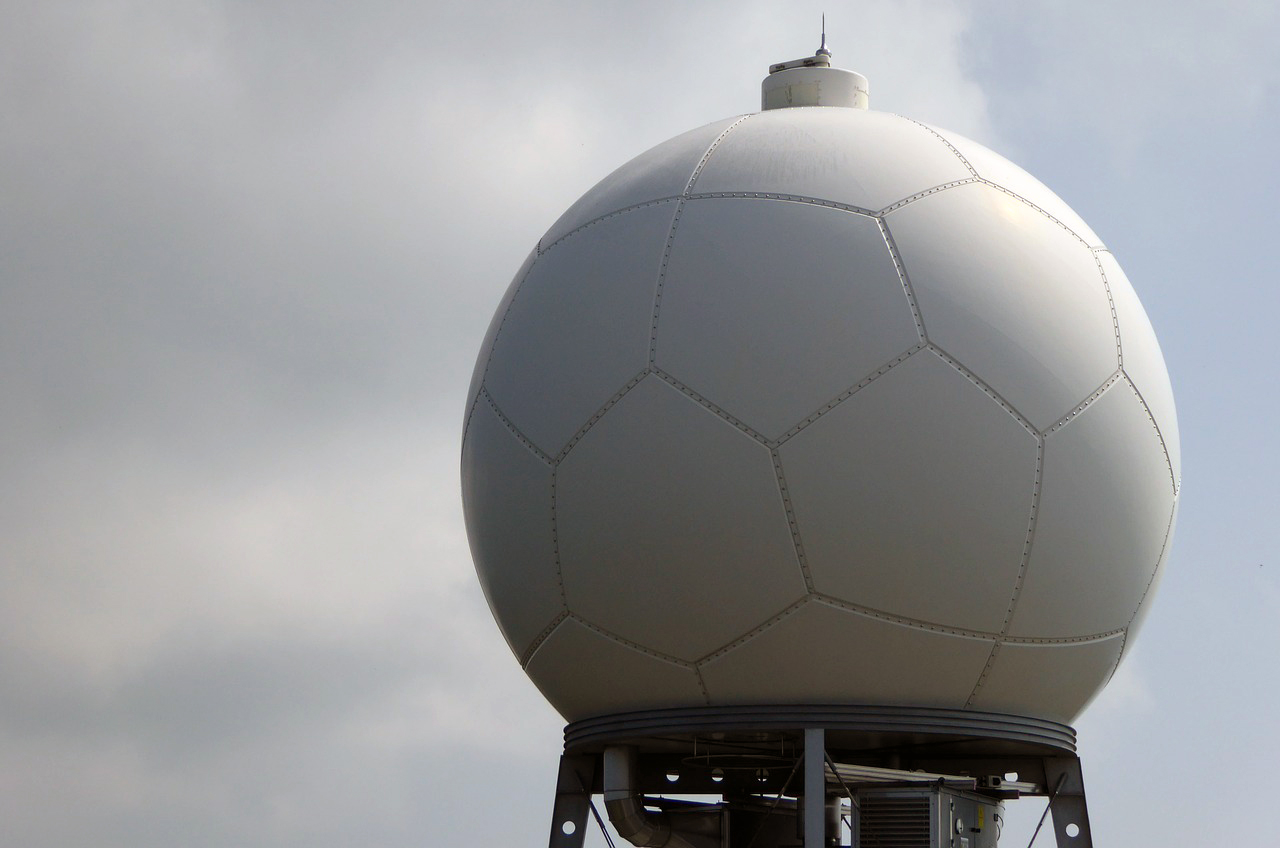 Doppler weather radar detects precipitation, such as rain, snow, hail, and other weather phenomena. The term ‘radar’ is an acronym for ‘radio detection and ranging’. Basically, Doppler radar uses radio waves to observe precipitation and wind in the area around the radar station.

During the Second World War, radar operators discovered that weather was causing echoes on their screen, masking potential enemy targets. Scientists began to study this phenomenon. Since then Doppler radar technology has come a long way and is now used by national weather services, research institutions and weather departments of television stations.

What is the Doppler effect?

Around 40 years before the Second World War in 1842, Austrian physicist Christian Doppler described a phenomenon what is now called the Doppler effect or Doppler shift. Doppler effect is the change in frequency of a wave in relation to an observer who is moving relative to the wave source.

When the wave source is approaching

Sound waves from a moving vehicle.

When the wave source is leaving

Conversely, when the source of waves is moving away from the observer, each crest of the wave is emitted from a position farther from the observer than the previous wave. Therefore, the arrival time between successive waves is increased, reducing the frequency. The waves are spread out.

How does a Doppler weather radar work?

The same Doppler theory is applied in weather radar to identify and determine the speed of precipitation in the atmosphere, towards or away from the radar station. Since precipitation, as it falls, generally moves with the wind, we can determine the wind velocity.

A conventional radar can only provide information about the location and intensity of precipitation associated with a storm but a Doppler radar has the capability to detect air motion within a storm.

Components of a Doppler radar system

Basic components of a Doppler radar system are as follows: 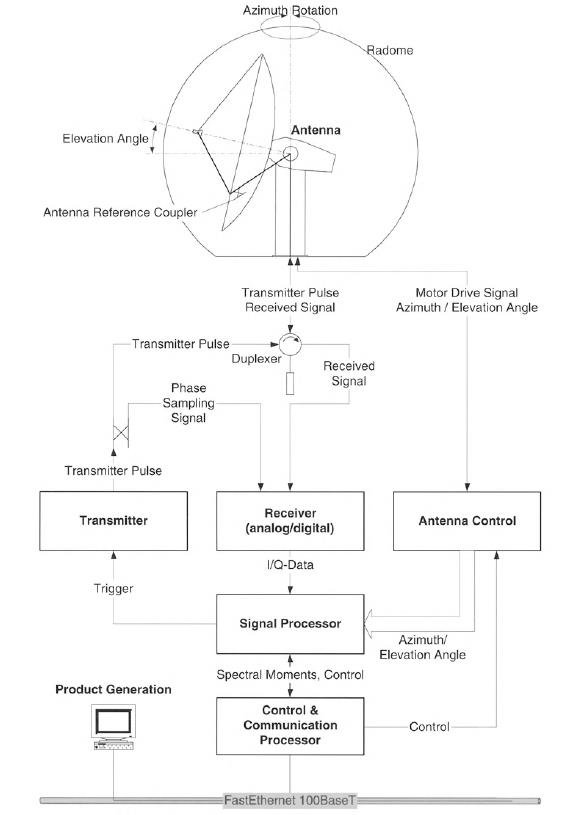 Inside the Doppler radar’s distinctive white sphere is a rotating dish (or antenna) that constantly sends out radio waves in short pulses. The transmitter dish emits pulses of microwaves, a type of radio waves, outward in a circular pattern.

When these radio pulses hit water particles in the atmosphere, it gets scattered and some energy is reflected back to the radar as ‘echoes’, which can be detected by the radar’s receiver.

The intensity of the received signal, known as the radar echo, reveals the type of precipitation like rain, hail, snow, etc. By measuring the time it takes for the pulses to leave the radar and return back, we can determine how distant the storm is. We can locate the storm by pointing the radar in a particular direction.

All data from radar scans are displayed on a screen according to the requirement of its users. Since data are obtained one angle at a time, a plan position indicator (a type of radar display) is used to generate a two-dimensional image. We need to keep in mind that the radar data received from different distances are at various heights above the ground level. 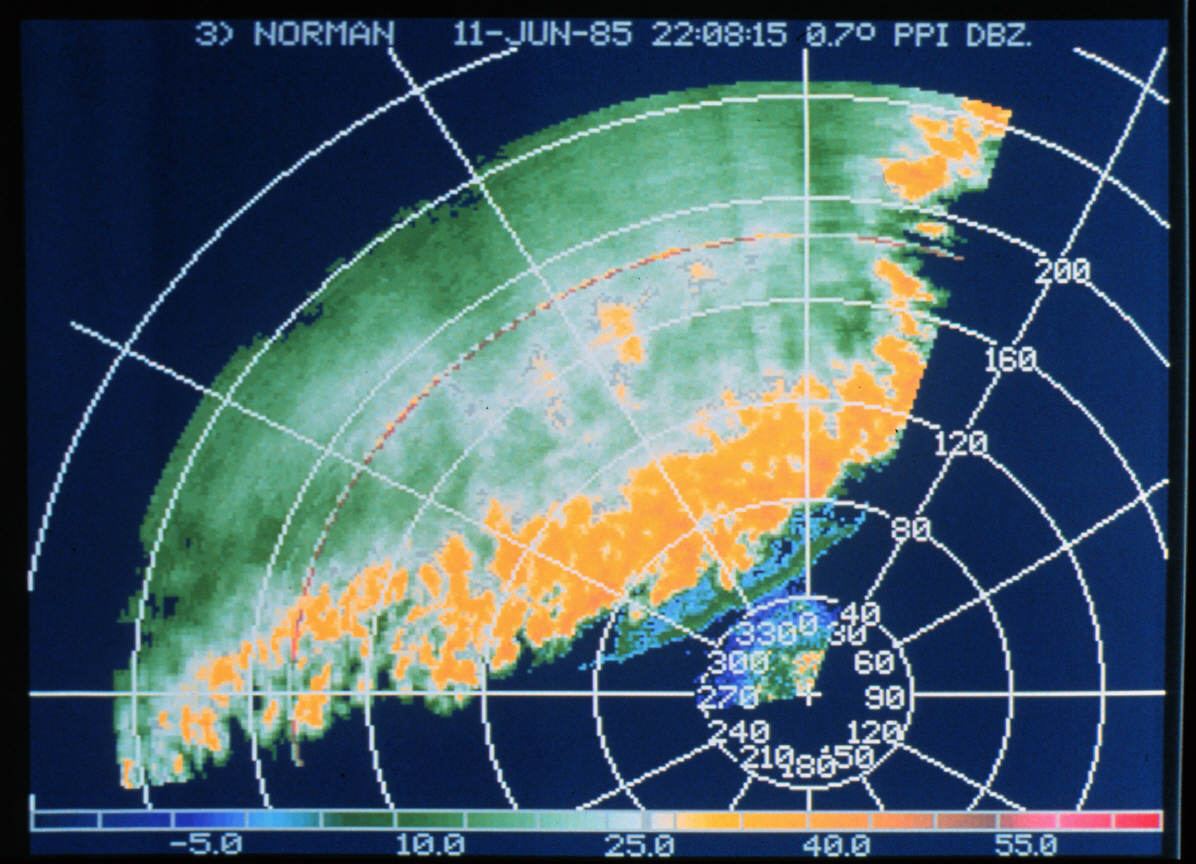 Reflectivity data of a Thunderstorm line. 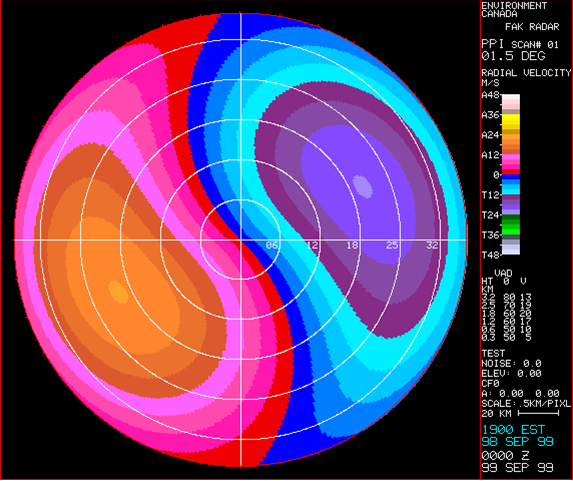 Velocity data of a Doppler radar.

For instance, if precipitation particles switch from moving toward the Doppler radar and move away over a small distance, the source could be a tornado.

The Doppler weather radar is just one of many tools that are being used to observe current weather. Interpretation of radar data depends on many hypotheses about the atmosphere and the weather. Doppler radar is used in combination with observations, satellite images, forecasts, and warnings.

Radar pulses spread out as they travel away from the radar station. Therefore the volume of air that a radar pulse can traverse becomes larger for areas located farther away from the station. As a result, radar’s resolution decreases at far distances.

For example, at a range of 150-200 km, the volume of air through which a single radar pulse may traverse might be on the order of a cubic kilometre. This is also called the pulse volume.

The curvature of Earth

As the radio waves travel through the air in a straight line, the curvature of Earth limits the radar beam’s optimal range to 5-200 kilometres. Beyond 200 km, the radar might show rain that is falling high in the atmosphere and does not reflect what is happening at ground level.

Radar and the curvature of Earth. Image: Bureau of Meteorology (Commonwealth of Australia)

Even within the optimal range, radars can sometimes detect ‘virga’ – precipitation that’s falling from a cloud that evaporates before reaching the ground. This is why sometimes radar may appear to show rain when it is not raining at the ground level. 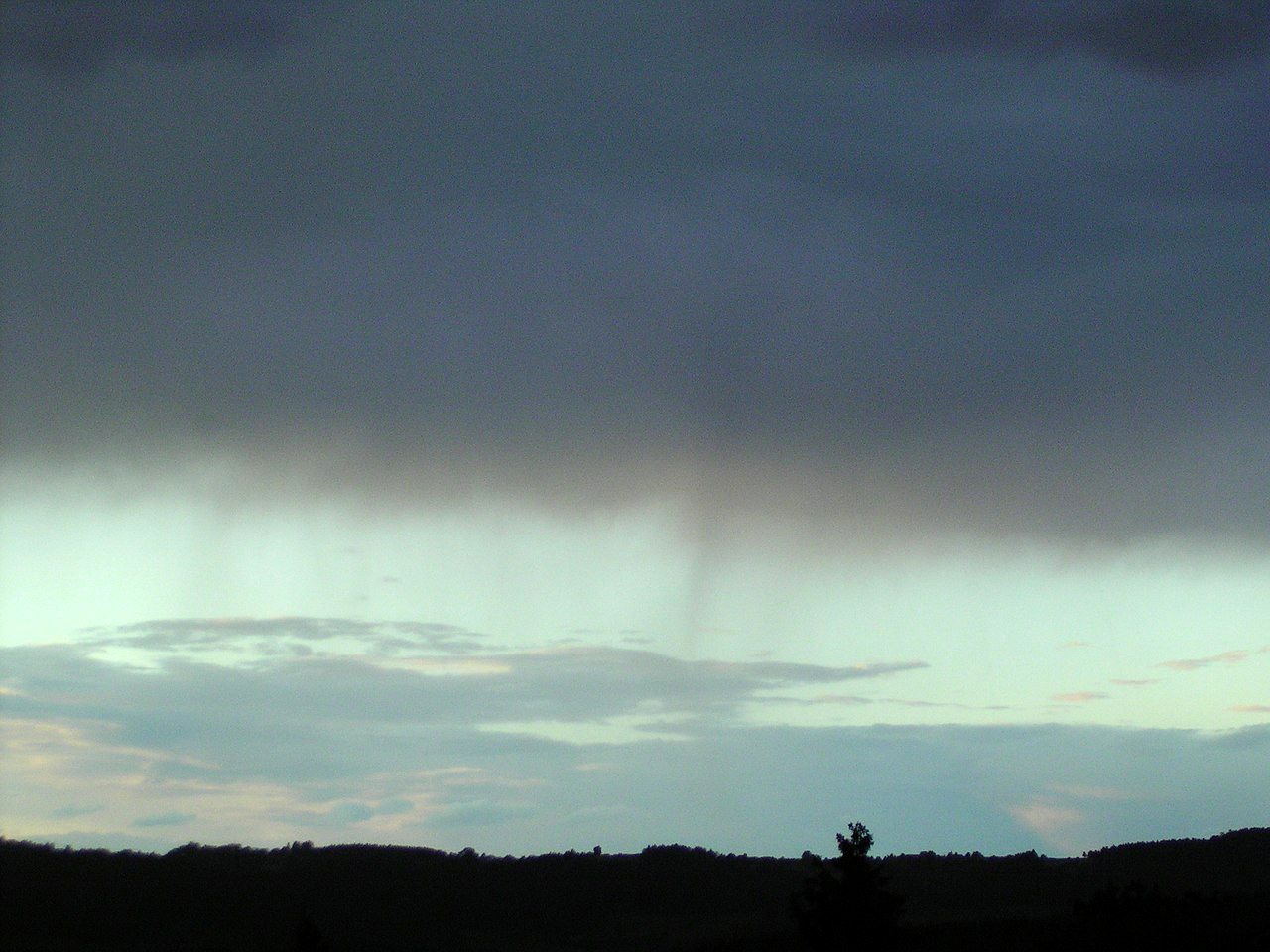 Drizzle at a low altitude is hard fo the radar to detect because the droplets are so small and form close to the ground level, hidden from the radar’s line of sight.

The cone of silence

No radio echoes are observed very close to the radar because the radar does not scan directly above itself. This is also known as the ‘cone of silence’.

The cone of silence.

Radar may sometimes detect faint echoes from other materials like aircraft, smoke from large fires, flocks of birds, swarms of insects, etc. Weather radars can also receive echoes from the Earth’s surface, known by meteorologists as the ‘anomalous propagation’. 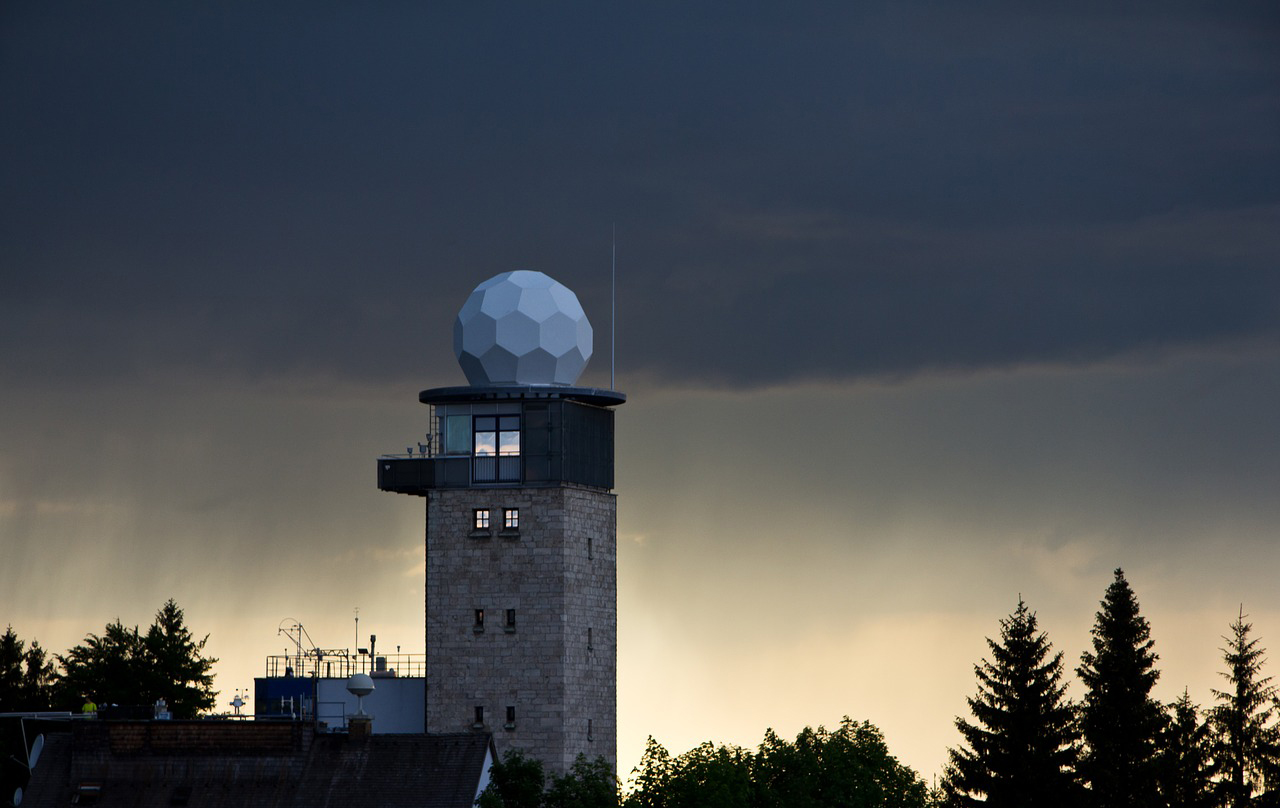 Doppler radar technology helps scientists study the nature of formation and dissipation processes of very destructive life-threatening storms. It enables meteorologists to forecast the location and severity of weather with greater accuracy. This has resulted in improved public safety and saved many lives.

← Previous Story What is gravitational lensing?
Next Story → How does lidar mapping work?