This article was originally published on December 20, 2012. 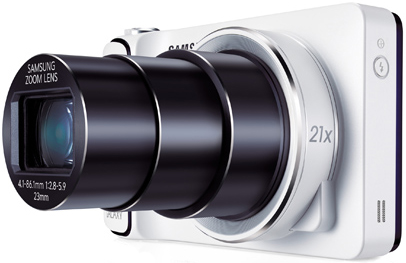 Samsung has released its latest digital camera with cool new features. The Galaxy camera seems to have features that are more photographer friendly. It has an Android Jelly Bean operating system powered by a quad core processor.
The camera has an 121.2mm (4.77″) HD touch screen display which allows (1280×720) recordings at 16:9 ratio. And you can see from the above picture, the Galaxy camera boasts a minimal design with smooth curvy exterior.

One of the notable features is its Smart PRO MODE which provides various modes for taking shots like light trails, action freeze etc.,
Slow Motion Video feature captures the video in 120 frames per second with 720×480 resolution and plays  it  in slow motion.
Voice control is one of the camera’s smart features. It allows the photographer to take snaps, zoom in or zoom out, view, share and delete photos and videos by just telling it.
Photo Wizard provides professional photo editing tools. Sharing becomes extremely easy with Share Shot feature. It uses WiFi Direct to share photos with friends while at the same time shooting them.
New Auto Cloud Back-up feature automatically saves all your shots instantly as you take them. With 3G and Wifi connectivity, upload photos on social media directly from the camera.