This article was originally published on March 26, 2012.

The air purifying effect of houseplants is made effective with an air filter created by French designer Mathieu Lehanneur and Harvard professor David Edwards as a part of an artistic science experiment. This air purifier named  Andrea takes this natural event to a whole new level as it goes green. 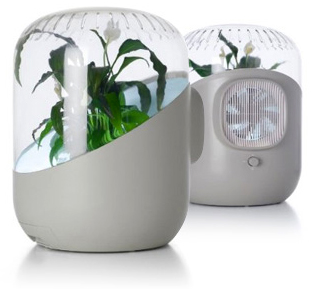 The air filter enhances an indoor plant’s filtering capabilities by housing it in a capsule. A fan pulls in air from the top of the capsule and allows the plant to filter out contaminants through its natural pollutant-zapping photosynthetic process. The fan then blows the clean air out into the room.
When the filter was still in its concept phases, the creators looked at NASA’s research of “space gardens” to clean re-circulating air for inspiration. Simply place any houseplant inside the container and the integrated, specially designed fan draws in ambient air toxins and circulates them around the plant’s leaves and roots which absorb and metabolize the toxins. 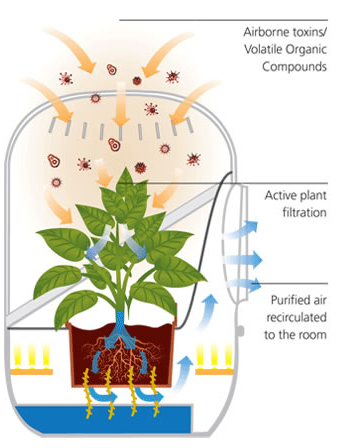 Although any plant can be used, the best performing plants are those which are actually quite common, including Spathiphyllum (Peace Lily), Marginiata Dracaena (red edged Dragon Tree), Chlorophytum comosum (Spider Plant) and Aloe Vera.
This living filter accelerates the removal of harmful VOC‘s and toxins through the active infrastructure system of a plant to continuously clean and oxygenate the rooms ion your home.
Andrea naturally purifies air by drawing it in with a whisper quiet fan to propel it through the leaves and root system of a plant, then out through the water and soil filtration and back into the room. Works with any household plant. Ozone free operation. No replaceable filters. 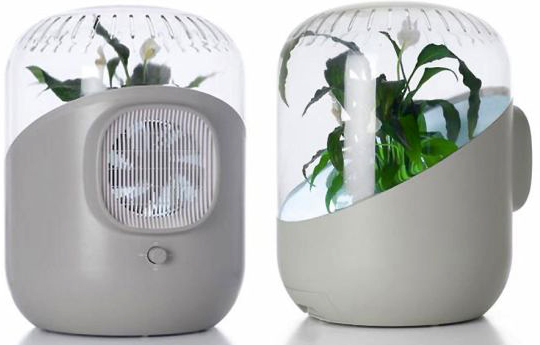 Fans inside the Andrea move air through the leaves, roots and soil; though the roots are capable of capturing more toxins than either the leaves or soil. After air has been pulled and pushed through the system through a vent on the side.
A removable tray in the base allows you to easily water the plant and you can adjust the fan speed by turning a dial. Its dimensions of 32cm in diameter and 45cm in height are suitable for use in rooms of any size. 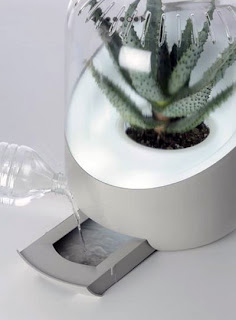 Early tests showed the system reduced the formaldehyde concentration in a room by 80 percent in one hour. What’s more, the system will work with any houseplant; though there are some that are better filtration agents than others. It is commercially available at $199.
This isn’t the first we’ve heard of the Bel-Air technology used in Andrea purifiers. The filtration system won a 2008 Invention Award, but was only in the prototype stage at the time. Andrea air purifier is a brilliant partnership between man and plant that accelerates nature’s natural ability to clean air in order to detoxify the atmosphere inside your home.