This article was originally published on March 1, 2012.

Like the Apple Mac and the Blackberry, a small handy computer Raspberry Pi (or Raspi) went on sale February 29,2012 was sold out within hours. Raspberry Pi is a green circuit single-board computer about the size of a credit card developed in the UK by the Raspberry Pi Foundation.
Created by a group of scientists, technicians and developers who planned to improve the computer science knowledge among the young Britain minds and ignite their interest in programming.

The processor is similar to the one used in many of the smart phones. It has a couple of USB ports and Ethernet port to connect to the internet. It has 1080p video playback and hardware accelerated graphics. It can plug into any TV and can power 3D graphics and Blu-ray video playback.
The design does not include a built-in hard disk or solid-state drive, instead relying on an SD card for booting and long-term storage. After plugging in a keyboard, mouse and screen, children are able to use the Raspberry Pi’s open-source software to write their own code. 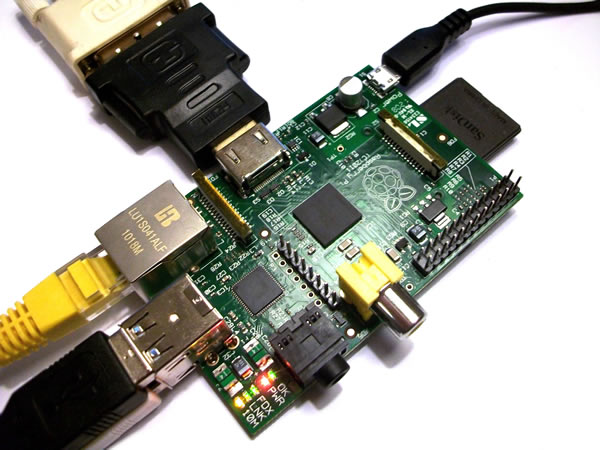 Raspberry Pi is like a skeleton of a computer, showing the inner components of the mini PC. Inspired by computers like the BBC Micro and the Commodore 64 in the 1980s, the group of engineers set out to build a new programmable machine for a new generation.
Specs

The project came about when a group of Cambridge-based computer programmers noticed that fewer and less-qualified students were applying for computer science courses at Cambridge University.

“The primary goal was to build a low cost computer that every child could own, and one where programming was the natural thing to do with it,” said co-founder Robert Mullins.
It will cost £22 excluding VAT, with the first 10,000 on release having been funded largely out of the pockets of the scientists behind the charitable Raspberry Pi Foundation.
The first version of the Raspberry Pi will be shipped to developers, and the hope is that they will design software that will enable children to design their own computer programs.
For More information: http://www.raspberrypi.org
Related Items